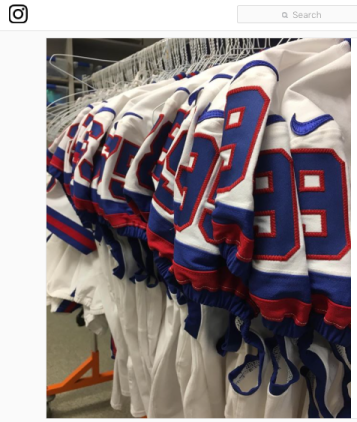 BERGEN COUNTY, N.J.- Hot off the press, the 2017 New York Giants’ color rush uniforms have been revealed via Instagram by equipment director Joseph Skiba! The uniforms, set to be worn against’ division rival Dallas Cowboys on Sunday, are the same white-on-white design as the 2016 uniforms. Both NFL fans and players loved the fusion of a contemporary color scheme with an ode to the Giants uniforms of the late 1980s and 1990s. In an exclusive story, Skiba and I talked about how the white uniforms came to fruition after John Mara changed his mind about the original design at the eleventh hour.  (For that story, click here.)

This summer, Sterling Shepard told me: “I love the all white, we all love wearing all white”.  But, he quickly added: “I think they could be better”.  Better?! Wildly successful, fellow wide receiver Odell Beckham, Jr.’s color rush jersey surged to the top of jersey sales charts almost immediately after they were revealed. I was perplexed.  Shepard explained that he wanted to “do all red unis instead of all white”.

Spoiler alert: all red uniforms are what Mara, the NFL, and Nike had originally agreed upon in 2016.  Mara and Shepard surely are on the same page. Perhaps next year, the Giants could look into an all-red ensemble.  After all, Shepard became an NFL fashion ambassador in September of this year and, less than a week ago, got engaged to a model.   The man clearly has an eye for fashion.

visit on my iTunes official podcast or my Soundcloud.