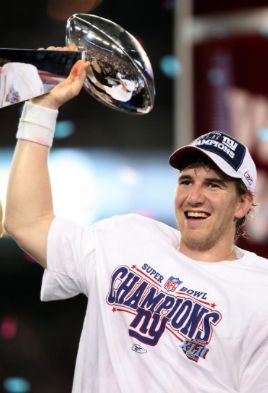 Even the most casual football fan’s indignation was never about second-string quarterback Smith or rookie quarterback Davis Webb. Everybody’s qualm was how the Giants’ brass failed to communicate with the quintessential New York Giant: Eli Manning.  Owner John Mara was not even in the building on the day McAdoo informed Manning of its decision on his playing time in Oakland.  Even Los Angeles Chargers’ quarterback Philip Rivers and New England Patriots quarterback Tom Brady, two men who, theoretically, should not be in his corner, expressed their support for the heartbroken and teary-eyed Manning.  Rivers offered a harsh criticism: “I honestly thought it was pathetic, really. The guy, he’s been out there 210 straight games with no telling how many bumps and bruises and injuries for his team. Won two Super Bowls, MVPs, the respect he’s had in the locker room over the years, really the respect he’s gained throughout the league…. I just thought it was too bad the way it was handled and then certainly Eli, we’re not close buddies, but as a friend, as a fellow quarterback, it was tough to watch him yesterday. You can only imagine how he felt.”  Brady dubbed it: “a pretty unfortunate situation”.

Manning told WFAN radio host Mike Francesa at 5pm today that had he been approached by Giants’ brass differently, and had the situation played out differently, he probably would have gone along with the plan for him to play the first half, then allow Smith to play the second.

With the dust clearing, what is next for Manning?  He turns 37 in January and has salary cap hits of more than $22 million in each of the next two seasons.  Manning has three options.

As they say: time heals all wounds. The Mara and Tisch families are hoping the remaining five weeks of the 2017 season are enough to remedy heartbroken Manning and Giants fans everywhere.

visit on my iTunes official podcast or my Soundcloud.