BERGEN COUNTY, NEW JERSEY- Following a 4-12 2018 campaign, the New York Jets hold the third overall selection in the 2019 Draft. For the first time since arguably the Joe Namath-era, the Jets seem to have a franchise quarterback in place around whom to build.

Scenario #1: The Jets get “their guy”

Since releasing Muhammad Wilkerson (Green Bay Packers) and trading away Sheldon Richardson (Seattle Seahawks), the Jets have fallen from being one of the most feared defensive lines in the league to being one of the softest. Leonard Williams (who the Jets selected at sixth overall in the 2015 NFL Draft) still remains the most fearsome defender on the line, however, Williams’ production has dropped dramatically in the absence of his former dominant teammates. Understandably, so. The game plan for many offenses was to neutralize him- there were no other real threats on the line.  In 2018, Williams, the only real threat on the Jets’ defensive line, registered only 5 sacks… tied for 75th in the National Football League. For this reason, Gang Green should be actively seeking a partner with whom Williams could terrorize opposing quarterbacks. My list of the top three targets for the Jets.

1. Quinnen Williams (Alabama): 6’3″, 303 lbs. In the Nick Saban-era at Alabama, 25 of his former players were selected in the first round of the NFL Draft.  14 of those 25 were defensive players. Some, like Dont’a Hightower, have captured a Pro Bowl nomination and Super Bowl victories.  Others, like Dee Miliner… have not panned out.

Williams seems to be a “can’t miss” pick.  His 4.83 40-yard dash time is the fourth-fastest by a 300+ pound defensive lineman in sixteen years.  He posted this time after everyone around him urged him to be satisfied with his time of 4.87 seconds. Spoiler alert: he was not satisfied. The Jets took notice via social media:

After a quick look at the 40-yard dash times of the quarterbacks in the Jets’ division, it seems as though Williams could catch up to any of them in the open field:

That is something for Jets fans to be excited about. While the Jets have their eyes on Williams, he has had his eyes on the Jets. Williams may get the opportunity to play alongside Jets lineman Leonard Williams.

It’s a blessing to workout with guys I look up to and try to model my game after 🙏🏽 @leonardwilliams pic.twitter.com/zSIs8AQWnT

Imagine the possibilities for defensive line’s nicknames? Maybe I should patent the “Williams Sandwich” or a meme where each Williams is the cookie part and the opposing QB is the cream part. After all, before running his 40-yard dash, Q. Williams ate 4 Double Stuf Oreo cookies!

2. Nick Bosa (Ohio State): 6’4″, 263 lbs. While Quinnen Williams has stolen headlines for his 40-yard dash time, Bosa (albeit forty pounds lighter) quietly posted an even faster time: 4.79. Bosa is part of a quintessential “football family”: his father John Bosa (former Miami Dolphins defensive end) and his brother Joey Bosa (current Los Angeles Chargers defensive end) both have NFL experience.  When Nick gets chosen in the first round, he will complete the trifecta of first-round Bosas (John #16 overall [1987] and Joey #3 overall [2016]). Because of this pedigree, one can assume that Nick is the most acclimated of the three to the NFL landscape, as he lived with his brother in-season last year. Inevetably, one can surmise that the brothers probably discussed game film, strategy, scouting reports, and the adjustment to life in the NFL.

During his tenure at Ohio State, Bosa appeared in 29 games and recorded 17.5 sacks- excellent production. The only knock on Bosa would be the debilitating groin injury he suffered, which caused him to miss significant time last year.

Nick Bosa was well on his way to becoming the highest-graded edge defender again before the injury bug hit in Week 3. He has a bright future ahead of him in the NFL. pic.twitter.com/rEZoZyLSuE

However, he is confident there will be no lingering residual effects from it: “This is one of the injuries that once you get it fixed, it’s pretty guaranteed to be good”. Bosa, himself, is also a lock.

3. Josh Allen (Kentucky): 6’5″ 262 lbs. In Allen, you get a versatile player with New Jersey roots (Montclair). Allen, though, grew up as a Pittsburgh Steelers fan. His sister Myisha Hines-Allen, is a forward for the WNBA’s Washington Mystics (one of twelve total players on the roster).

Listed as an “edge” rusher, Allen is a hybrid player that can line up as a lineman or as an outside linebacker.  He’s the fastest of the defenders I’ve listed: his 40-yard dash clocked in at 4.63 seconds. In his senior year at Kentucky, he seemed to have figured something out: he logged 17 sacks, over double the amount from his junior year (7). Allen clearly gets after the quarterback and that is precisely what the Jets need.

Allen would be joining an already crowded Jets’ linebacking room (there are fourteen players already listed at that position). Avery Williamson, a fellow linebacker, was on the field for 99.5% of the Jets’ defensive snaps in 2018.  That is tied for third most in the entire NFL. Furthermore, the Jets just agreed to blockbuster deals with linebackers Anthony Barr and CJ Mosley.

Then, Tuesday afternoon, Barr backed out of the Jets’ deal, clearly using them as leverage to return to his former team, the Vikings. The linebackers room has thirteen men in it.

If the Jets select Allen, it would mean that they have finally given up on the Darron Lee experiment (a round 1, twentieth overall draft miss in 2016 by Mike Maccagnan.) Lee was suspended for the final four games of the 2018 NFL season due to a PED violation. If they are willing to admit that Lee never panned out, Allen would be an excellent addition to an already fast Jets defense.

Scenario 2: The Jets don’t get “their guy”

In looking at the players on the Jets’ current receiving corps, based on health and talent, it’s improbable that any of those men would be number one receivers elsewhere. For some reason, and anything can happen on Draft Day, if the Jets do not get their top defender-of-choice, the Jets should absolutely trade back and pick a wide receiver. While hitting the jackpot with any pick is always a gamble, the Jets should have extensive scouting reports on all of the receivers in this draft.

Since 2011, the average draft position for a first-round wide receiver is sixteenth. In 2019, the board looks like this:

#15 Washington Redskins (*Is Case Keenum really the answer? Are the ‘Skins still in the market for a franchise QB?)

Undoubtedly, any of these teams would be happy to move up in the draft, including the Cleveland Browns, who own eleven picks in this year’s draft.  Based on their official scouting reports, high on the Jets’ draft board at that position should be: D.K. Metcalf, Marquise Brown, Parris Campbell, A.J. Brown, and Deebo Samuel. 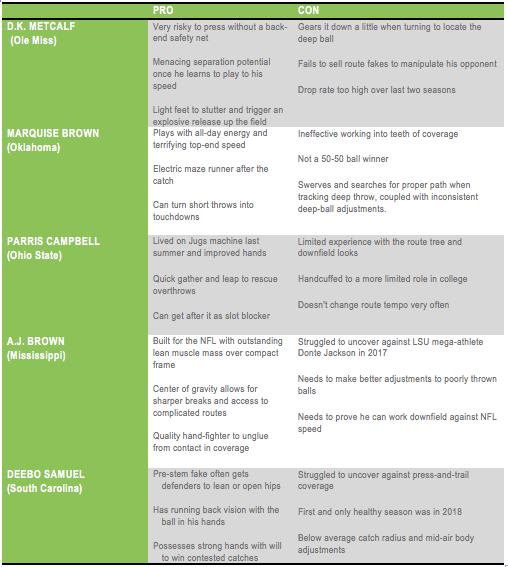 It looks as though D.K. Metcalf will, in fact, live up to the hype surrounding him and his 1.6% body fat. You definitely cannot pass up a man whose scouting report uses the word “menacing” in regards to separation.

With a young quarterback in mind, forcing to the opposing defenses to install a “safety net” on the third level will open up the entire passing game. D.K. Metcalf is my number one choice for the Jets at wide receiver, if they choose to go this route.

Other receivers that I would recommend, with a quarterback in his second year (and having to learn another new offense: third in three years) would be: Marquise Brown for his after-the-catch ability, A.J. Brown for his toughness, and Debby Samuel for his strong hands.

To download these audio selections, including hundreds of others and my full radio shows, click on the image below! 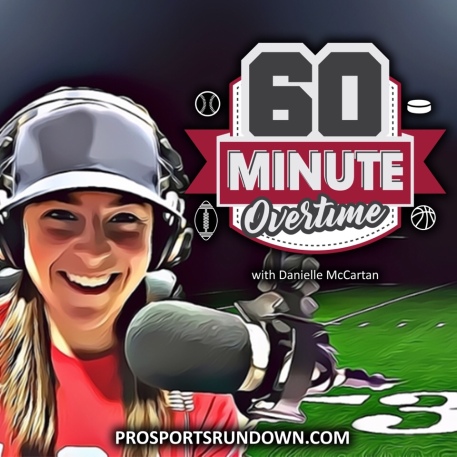