BERGEN COUNTY, N.J.– Odell Beckham, Jr., mercurial superstar wide receiver, is known for torching defenders over the middle of the field and for making circus-like one-handed catches… and also for, out of frustration, head-butting a sideline cooling fan and swinging his helmet to knock over a kicking net.  Quite honestly, I was not sure what to expect from the 25-year-old enigmatic wide receiver on Friday night.  Beckham, Jr. partnered with Procamps to host a Women’s Football clinic in Waldwick, New Jersey… and yours truly was there to experience it first-hand.

The night started with a cocktail reception and each player received tokens for two drinks of choice.  I chose a glass of white wine for myself and a bottle of Brooklyn Lager for my cameraman Matt Sigtermans (MS Films). There were Pizza Hut pizzas for those that were hungry, those that were possibly coming directly from work. I wasn’t hungry, but snacked on a breadstick anyway!  In the meantime, women were organically migling with like-minded, football fanatic women.

Coaches from around the area, donning red “OBJ” t-shirts, were standing at the ready at their stations set up on the turf in the indoor superdome.  Then, Beckham, Jr. emerged from the revolving door, with a wide smile, his blonde curls bouncing as he jogged to the stage. He and his mother addressed the crowd and the takeaway message was one of female empowerment, that ‘girls can ball too’!  This is a concept I’ve embraced my entire life… and I was ready to let OBJ and the rest of the campers know it!

My team, Team 11, first played a two-hand touch game against another team. In this, the coach drew up plays on his hand while we, the campers, executed them.  Throughout our game, I switched off from wide receiver to quarterback.

Mid-game, we were summoned by the man with the microphone to the stage area to take our one-on-one photo with Beckham, Jr. Not wanting to look so sweaty for the photo, I fanned myself while I was waiting in the line. Odell firmly shook my hand and I asked him if I could throw him a pass later on.  He replied emphatically, “2000%”. I said, “okay, I want you to go long”, to which he replied with a nod.

From there, we completed many offensive drills where we learned: halfback options, inside/outside shoulder ball placement, precision passing, post patterns, and even got to try making OBJ-like, one-handed receptions (I was the only one in my group able to do so)!

Throughout the drills, everyone in Team 11 was checking in to see where the star of the night, OBJ, was and what he was doing.  In fact, he was bouncing around from group to group, but seemed to focus in on playing in the scrimmages. We were wondering when our chance to play with him was going to come.

The wait for our second (and final scrimmage) was well-worth it. It was a rematch with the original team that had beaten us in first scrimmage. This time, Beckham, Jr. was playing the “automatic quarterback” for both teams. I ran over to what I thought was going to be a huddle.  There wasn’t a huddle- just OBJ holding the football to block his mouth from the defenders… as if they were going to steal the play! One can never be too careful, I guess.  What I noticed, so up-close with Beckham, Jr. was that he had a rhinestones in the shape of a cross on his left canine tooth.  I wondered to myself if they were real diamonds.  In fact, they were.

Meanwhile, Beckham interrupted my thoughts by saying “Double Pass”. He gestured for me to run out and set up to the right. I did as I was told, he snapped the ball, dropped back to pass, and fired a bullet to me.  I looked downfield… all the way downfield and saw a wide open receiver on her way to the end zone. The ball hit her in the hands… incomplete.  After I let out a groan of frustration, I turned to see a wide-eyed, smiling Beckham, Jr. looking at me with his eyebrows raised.  He said “I can hang with that”. He was clearly impressed. Goal, accomplished!

The double pass must be OBJ’s favorite play, I mean, who wouldn’t love it if it looked like this every time it was executed?!

Later in the game, we set up for another double pass, and it was my impression that  Beckham, Jr. was going to be my intended receiver. After a quick check-down, I realized that he was standing in the same spot.  I chose another receiver and winged a complete pass for a gain of about 10 yards.  I put my arms up and gave Beckham, Jr. the “what the heck are you doing” look.  I said “that was supposed to be for you!”. He replied: “I was sliiiiding in there”. I replied, with a laugh, “well, you were sliding in too slow!”. Beckham laughed as we prepared for the next snap. 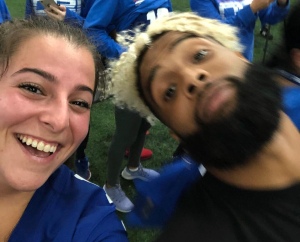 A few plays later, I ran a flag corner route to the end zone, Beckham rolled out to my side (the right side) to pass, and he let one fly in my direction.  With no defenders around me, I knew that I could not drop this pass.  I didn’t- touchdown non-pinny team! I ran back towards my quarterback and gave him a high-five for throwing the ball right-on-the-money.

The night ended with a couple of one-on-one competitions with Beckham, Jr. where I learned that campers came from as far away as Alabama!  I felt grateful that I only live about ten minutes from the event.

Before the final group photo was taken, Beckham Beckham, Jr. addressed the group of women and male coaches and promised to host the women’s camp every year! I’m already looking forward to next time. And, being Odell Beckham, Jr., with a laugh, he added “…and all the single ladies can meet me at the bar.”  The crowd went wild… just as it does every Sunday for him and the New York Giants.