BERGEN COUNTY, N.J.- Any listener to my sports talk radio show (60 Minute Overtime – #60MinOT)  knows that my draft strategy is not to select the best player on the board (unless as a trade chip), but to select players based on the team’s needs.

In this year’s draft, the New York Giants possess the 23rd selection in the first round.  In my opinion, the Giants need to choose an offensive player.  With Eli Manning’s career in its twilight, they are in a win-now mode and are only two of pieces away from winning the Big Game: 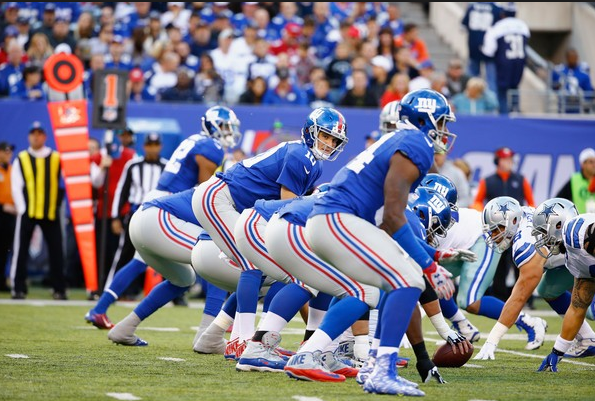 It is no secret that, moving forward, the Giants need a game-changing running back and a better offensive line.  A choice at either of those positions would fill a gigantic deficiency for Big Blue.  Its offensive line was ranked 20th in the league by Pro Football Focus last season. For the Giants, Justin Pugh received the top offensive lineman grade and the top run-blocking grade, but still half the players in the league were better than him. Help, in terms of more talent, would increase his productivity. Says PFF: “The Giants may have fielded the worst pair of tackles in the game this season.”

With all of this in mind, the Giants’ draft path is not as straightforward as I anticipated the New York Jets’ being.

In order of preference, I present my top 3 choices for the Giants in the 2017 National Football League Draft:

1.Christian McCaffrey (RB, Stanford).  It is presumed that Leonard Fournette will have already been selected by another team. Because McCaffrey is a multi-faceted player, he would be a good fit in the Giants’ pass-first offense.  McCaffrey broke a record (previously held by Pro Football Hall of Fame RB Barry Sanders) for most all-purpose yards in a single season.  He is elusive in the backfield (average 6.2 yards/ rush, 21 TDs/season) and as a pass-catcher (average 12.2 yards/catch, 10 TDs/season).  Additionally, McCaffrey recently ran a 4.48 second 40-yard dash at the NFL Scouting Combine.  His time was 5th best among all running backs, beating “top-prospects” Fournette and Dalvin Cook. Overall, he reminds me of a Julian Edelman-type threat and would be a good addition to the Giants.  It may even become a family affair: his father, Ed McCaffrey, was drafted by the Giants in the 3rd round of the 1991 NFL Draft!

2. Forrest Lamp (OG, Western Kentucky). Lamp is listed as being 6’4” and 309 pounds, great size for an offensive lineman. The reason why Lamp is such an attractive round one pick is that he is versatile.  With his quick, sure feet, he can effectively play all three offensive line positions: center, tackle, and guard. As a coach, what more could you ask for?  He is durable and strong.  Lamp had 34 bench press reps (at 225 pounds) at the NFL Combine – tied for second best among all potential draftees.

3. Ryan Ramczyk (OT, Wisconsin).  Should Lamp not be available at the 26th pick, the Giants should grab Ramczyk- a monster in size: 6’6”, 310 pounds.  For me, he comes with some red flags, though.  Although Ramczyk completed 25 bench press reps at combine, he did not participate in other events due to injury.  Furthermore, his commitment to the game of football troubles me.  Ramczyk turned down two offers to play football in college and chose to start at a small technical school.  It was a long path for him to eventually sign on to play football at Wisconsin.  Also, he suffered a severe hip injury that resulting in having surgery before Wisconsin’s bowl game. The upside is that he had not had any significant injury prior to that.

On 4/25/17: I also discussed this on ESPN Las Vegas’ Cofield and Company (afternoon drive)