On national television Monday night, the Chicago Cubs raised the 2016 World Series flag at Wrigley Field.  By “the Cubs”, I literally mean the members of the entire team.

After the National Anthem, lead by first baseman Anthony Rizzo,  the players walked across the field, under the bleachers, past concession stands, up the steps, and through the cheap seats (arguably where the “best” fans sit).  Each player took a pull on the championship flag’s rope to raise it.  Then, they walked back through the stadium corridors onto the field.  How many other teams have you seen celebrate their championship among their fans?  For one thing: The New York Yankees never have.

Manager Joe Maddon told me in his first interview after winning the 2016 World Series that he “never felt the 108 year old weight” and that he “went about [his] business as normal and it played out well”.

When I asked if there was there any added pressure because of the 108 year drought, he replied with the most normal of responses: “we all have pressure on us every day. Whether you’re driving to work and caught in a traffic jam, or ‘what are your kids doing that night?’, or ‘is there something awry with your children’?”

The Cubs are a blue collar team with a manager possessing a working-man’s credo.  They raised a championship banner among their die-hard fans in the cheap seats Monday night.  The Cubs have not “gone corporate”…. yet. 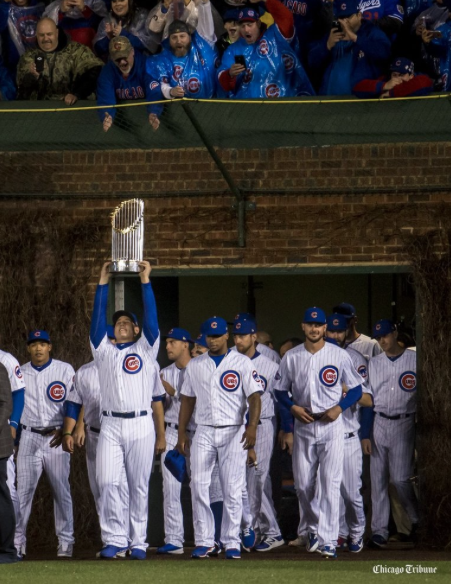 As per the Chicago Tribune, for the 2017 season, the Cubs brass enacted a 19.5% ticket price increase on season ticket plans for Cubs home games.  Within this parameter was a 6% price increase on bleacher packages and a 33% price increase on infield box packages.  For this season, the highest-priced seat, in a dugout box, is $409 for one of three “diamond-level games”: opening day and Saturday games against the Yankees and the St. Louis Cardinals.  I do not know any “Average Joes” that can afford a $409 chair for an individual game.  I know I cannot.

What should be most concerning to Cubs fans is the construction of the American Airlines 1914 Club behind home plate (set to open for Opening Day 2018). I do not mean to be rash, but: is historic Wrigley Field (which opened in 1914) on its way out?  Will there be a “new” Wrigley Field with the same dimensions as the “old” one to make room for private suites, plush seats with club access, and obstructed-view bleachers?  Fans in the New York area know the pain of being priced out of affordable, sustainable ticket packages first-hand.  Will the ‘House that Rizzo Built’ become the ‘House that Chicago Fans Finance’? With the amount of young talent set for a pay-day at contract expiration, do not be surprised. For the sake of the Cubs’ fanbase, I hope not!

There is nothing worse than to watch men in suits sitting in $1,000 seats going home after four innings!

When I asked Maddon about the magninute of the turnout of the World Series victory parade, he emphatically replied: “Oh my God. I did not anticipate that. Ferris bueller’s day off times fifty. Everybody was there.  It’s one of those once in a lifetime moments and I really, like a lot of things more recently, try to enjoy it.”

The Cubs have already shed the title of Lovable Losers in winning the 2016 World Series.  They are in danger of real losing their blue-collar identity, as well. I hope to see the Cubs stick by the fanbase that has loyally supported them through the hard times.  Remember: there is a generation of Cubs fans that never got to witness its team capture the title.  Real baseball fans cannot afford to witness another “sell-out” team.

@CoachMcCartan @YouTube Good call on @Yankees stadium crowd now. Average fan priced out of anything but the cheapest of seats. Also, nice kitchen! 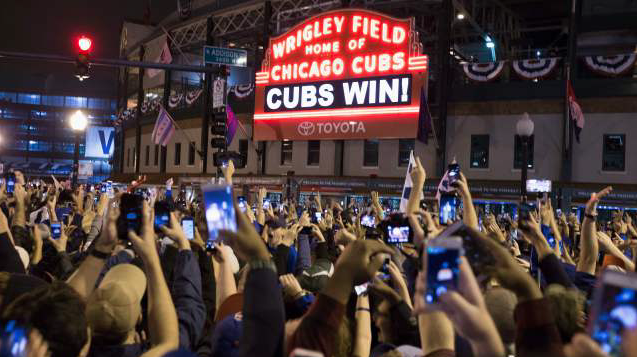