BERGEN COUNTY, N.J.- Rest assured, New York Rangers fans: Henrik Lundqvist told me that he will not jump ship from the team that, in 2000, drafted him 205th overall. When I asked if he would ever consider leaving New York in order to pursue a Stanley Cup championship, Lundqvist replied with a firm “no”.  He continued to tell me: “New York is my home and they’ve given me this great opportunity to play a lot of hockey.  I would like to say: I love every second of being here, 0f being part of this organization.  My goal is to stay here, absolutely.”

Lunqvist is not concerned about the possibility his legacy might be void of a Stanley Cup trophy, telling me: “I don’t think about my legacy when I play”.

King Henrik went on to say: “The only thing I think about is: trying to win and I want it badly. That’s my goal, that’s my dream, that’s why I go to work everyday: to try to improve my game and to try to help this team win.”  If the season ended today, the Rangers would have locked up the top wild card seed in the Eastern Conference.  There is plenty more hockey to be played, however, and anything is possible.  The National Hockey League’s playoffs begin on April 12, 2017. 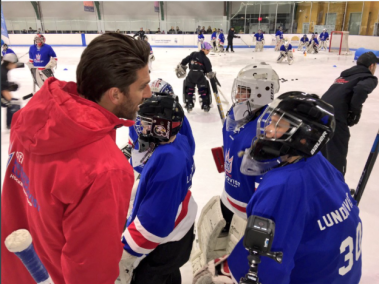 Henrik Lundqvist, surrounded by 50 young hockey players, was the star of the show at Chelsea Piers’ Sky Rink last Saturday night. Campers clamored to be near him and parents were pressed to the glass in order to snap of photo of him interacting with their kids. When I asked Coach Lundvist about partaking in this unique event, he replied: “I just enjoy seeing [the campers’] fire. You can see that they love the game [and] they love what they’re doing. I see myself [in them].  I see myself at that age where you dream big and you just want to go out there and improve.  For me, it’s about trying to inspire them… [to] give them an extra push.” All was made possible by Procamps, a company specializing in youth camps for all sports across the United States of America.