BERGEN COUNTY, NJ- For the third time in nine years, the New York Giants’ road to the Super Bowl will run through Green Bay, Wisconsin. Big Blue Nation is hoping history can repeat itself, as they defeated the Green Bay Packers, at Lambeau Field, in January of 2008 and of 2012.  Those in and around the Packers organization are hoping that the third time, is in fact, a charm for them.

The Packers were led by both Brett Favre (2008) and Aaron Rodgers (2012), while Eli Manning has quarterbacked the Giants through all of the match-ups.  Packers Super Bowl champion Ryan Grant is no stranger to this playoff rivalry: he was the running back of the Packers in 2008 and in 2012.  Listen as he and I discuss his career, the famous Lambeau Leap, meeting President Obama (a Bears fan), the careers of Favre and Rodgers (with whom he played), the most recent Giants and Packers playoff meetings, and this Sunday’s Wild Card game.

In their 19-10 victory against the Redskins in week 17, Giants’ rookie running back Paul Perkins ran for 102 yards on 21 carries (averaging 4.85 yards per carry).

Slowly but surely, the Giants running offense is becoming more of a factor in games. The Giants had 161 total rushing yards against the Redskins, more than double their season average.  Giants’ head coach Ben McAdoo praised Perkins’ technique: “I thought he ran nicely…I thought he had a couple of nice cuts and stuck his foot in the ground. He had a chance to put his pads on a couple times and run for some physical, tough yards. We’ll look at the tape.”

One must note that the Redskins have the 24th ranked rushing defense while the Packers have the 8th.  For success against the Packers, the Giants offense must be two-dimensional.  Look for the Giants’ offense to mix in some play action to open up passing lanes, however, balance is key. This Sunday, Eli Manning cannot have 63 passing attempts like he did in the Giants’ week 9 loss to the Philadelphia Eagles (24-19 final score).

2. Capitalize on the Packers’ Depleted Secondary

The Packers have the second-worst passing defense in the National Football League.  The only team worse than them in defending passing plays is the New Orleans Saints.  In week 17, the Packers defeated their divison-rival Detroit Lions to capture the NFC North title for the fifth time in six years.   However, that victory did not come without a cost.  In that game, where Lions’ quarterback Matthew Stafford threw for 347 yards and two touchdowns, Green Bay lost three cornerbacks due to injury: Quinten Rollins, Damarious Randall, and Makinton Dorleant. As a result, safeties Morgan Burnett and Micah Hyde found themselves covering more ground than usual.  They seem to be taking it in stride, however. In a post-game interview, Burnett said:  “At this point, it’s just all hands on deck, and doing whatever’s needed to help the team win.” Hyde is certainly doing what is needed to help the team win.  He intercepted a pass intended for Golden Tate with 1:35 left in their division-clinching win. After the game, Hyde said: “It’s real out there. It definitely is. It’s real. That’s why [cornerbacks] don’t get enough credit.”  The Giants need to take advantage of the depleted Packers secondary with their three-headed monster receiving corp: Odell Beckham Jr., Victor Cruz, and Sterling Shepard.  Beckham Jr., with his open field speed and impressive run-after-catch gains, will have a big game.

Predicting that this game will “come down to the trenches: the offensive and defensive lines”, Grant told me “[Rodgers is] if not the best, one of the best.  Right now, the [offensive] line is phenomenal. The way they’re playing is top notch. You really can’t ask for a better job from them across the board. They’re giving Aaron … time, they’re playing aggressive, they’re controlling the line of scrimmage.

Aaron Rodgers is most dangerous when he has time to hold on to the ball in the pocket. If Rodgers is able to direct traffic behind the line of scrimmage while the play is in progress, the Giants will be in trouble.  In week 17, his offensive line and scrambling capability afforded him almost nine seconds before he connected on a fourth-quarter touchdown pass to Geronimo Allison (who has emerged as a threat downfield).  The Giants must create and sustain consistent pressure on Rodgers with their defensive linemen.  They cannot afford to pull anyone off of coverage to add additional pressure, as Rodgers always keeps his eyes (deep) downfield when scrambling.It is important to note that Rodgers posted his worst passer rating of the season (65.0) and threw his season high interceptions (2) when the Giants met the Packers on October 9.

It also helps that Rodgers is working with one of the most clutch set of wide receivers in the NFL: Jordy Nelson (97 catches for 1,257 yards and 14 TDs), Davante Adams (75 catches for 997 yards and 12 TDs), and Randall Cobb, who, if healthy, can be a huge threat to the Giants’ defense. Cobb has missed the final two games of the regular season with an ankle injury and is questionable for Sunday’s contest. 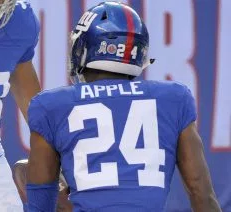 Covering these receivers is a tough task for any team, but the Giants are more capable than most. The Giants are equipped with three top cornerbacks, Janoris Jenkins, Dominque Rodgers-Cromartie, and rookie Eli Apple. Rodgers-Cromartie is on a hot streak and led the team with six interceptions (four of them came in the final three games of the season).  Most notable is his interception of Redskins’ Kirk Cousins in week 17 that sealed the win for the Giants.

This season, the Packers started 4-6 and doubts rained down on their ability to make the 2016 NFL Playoffs.  Somewhat Joe Namath-esque, Rodgers declared the Packers would  “run the table”. When I asked if he believes they really could do it, Grant told me “I think they can, yes.”  Despite the slow start, Rodgers finished the 2016 regular season with impressive numbers: 65.7% completion percentage, 4,428 yards, 40 touchdowns, 7 interceptions, and a quarterback rating of 104.2.

It is almost definite that Jason Pierre Paul will not be ready to play on Sunday after having surgery on a sports hernia.  The Giants’ defensive line is making due without him, however, especially with Damon “Snacks” Harrison having one of the best seasons of his career (2.5 sacks and 86 combined tackles). Rodgers must avoid the initial wave of pressure from the Giants’ defensive line and be smart with the football.  When other defenders slide in to add pressure, Rodgers must keep his eyes downfield to find the open man.  When other defenders stay back in coverage, Rodgers must take what he is given on the ground.  Rodgers is dangerous behind his stout offensive line.  Believe it or not, in the regular season: he was the league’s fourth best rushing quarterback (369 yards, ave. 5.5 yards/rush, and 4 TDs). Grant confirmed this by telling me: “Aaron is that much better when he can run, when he has something.”

While Grant does not “think this game is going to come down to [it]”, I believe this Sunday’s game will be decided in final ticks of the clock. Rodgers’ late-game heroics are what makes him special.  A Google search for “Aaron Rodgers Hail Mary” yields 362,000 results in less than one second.  Rodgers’ most recent legendary comeback was his 60-yard heave to Jordy Nelson against the Chicaago Bears on December 18, 2016.  This set up a 32-yard Mason Crosby field goal as time expired. Rodgers is ranked sixteenth among active quarterbacks in engineering game-winning drives.  Eli Manning is tied for third place in that category.

If the Packers can manage the fourth quarter clock to have possession and to score last, preventing the Giants’ offense from taking the field at the end of the game, they will be victorious.

Manning has lead the Giants to an 8-3 postseason record. Among those games, “Postseason Eli” and his Giants were perceived as the underdogs in 5 of the 11 games. This Sunday, the Giants have found themselves in a familiar position: the Packers have opened as four point favorites. Manning has always found a way to overcome adversity (including, yesterday, diffusing a situation which found his wide receivers partying with Justin Bieber on a yacht in Miami after defeating the Washington Redskins).  The Packers and their injured defense must find a way to stop Manning from connecting with his targets.  Manning has 17 touchdowns 11 postseason games, so the Packers secondary, second-worst in the league against the pass, must come well-prepared with a variety of different coverages.

At kickoff, the temperature figures to be between 12 and 19 degrees.  Grant told me “I don’t think the weather is going to be that much of an issue as it was in other playoff games against the Giants.  I think that it will be cold, but it won’t be bitter, excruciating cold.” Playing one of the coldest games in NFL history at the Frozen Tundra, he would certainly know.  Offering a summarization for Sunday’s NFC Wild Card game between the Giants and the Packers, Grant said: “When you get to playoff time, it’s really what the defense can do, whether or not they can stop that prolific offense, especially that passing attack, by the Giants. Especially with the [Packers] secondary being a little depleted, it’s going to be interesting to see.  I think both offenses are rocking right now so it’s going to be a matter of whichever defense is able to create a couple turnovers and make big plays happen.

Ryan Grant’s prediction: “I don’t really make predictions, [but] right now I’m leaning towards the Packers … I think the score will be between the 20’s and 30’s”