LITTLE FALLS, N.J.- On December 2, 2016, the Yogi Berra Museum and Learning Center hosted Joe Maddon (fresh off managing the Chicago Cubs to a 2016 World Series championship) Ken Rosenthal (Fox Sports journalist), and a sold-out crowd. Prior to the program, within the hallowed halls of the museum, I was able to catch up with the Italian-American manager and talk about his heritage, the 2016 World Series, the White House, the future of the Cubs, and much more.

The Story Behind his Late Father’s Angels Cap

Since appearing on national TV following the Cubs’ miraculous Game 7 victory, much has been talked about Maddon’s father’s Angels cap. Why does he carry it? Why is it an Angels cap? Maddon explains: “It’s here, in town right now.  It goes with me everywhere.  It’s in my backpack.  My dad was a big baseball fan.  My father used to play baseball with me every day when he’d come home from work (he was a plumber)…. He passed away in 2002, the year the Angels won the World Series.  This is his hat, not from that year specifically, but a hat he wore all the time. So, it was in the dugout when the Angels won the World Series in 2002, [I] probably messed up in 2008 and didn’t put him in the dugout versus the Phillies. That was my mistake.  And that last game in Cleveland when things weren’t going so well,  I ran upstairs during the rain delay and I stuffed it in the back here, underneath my hoodie.  Seriously, I was tapping that sucker during the game…. So my dad has been has been witness to two World Series victories”.

Correct. However, Maddon’s father decided to shorten the family’s last name from Maddoni (very Italian) to Maddon (very American).  “…In Hazelton [Pennsylvania] where my grandparents Carmen and Rosie are buried, there’s actually a tombstone [next to them that] says Maddoni. So I have to believe there’s something … relating to that.”  So, with an American last name (unfortunately), does Maddon embrace his Italian heritage? “Oh of course. Oh please. Yes! I came from a really large family. My dad had 10+ brothers and sisters…. The Italian side of the family, we really were related to half of the city!… When I was a kid, the reunions drew about 200+ people”.

As far as speaking Italian, “I did. I parlo italiano in high school for two years: junior and senior years. I have pretty much forgotten all of it.”  It is true that if you don’t use it, you lose it, but it is never too late, to start it back up!

Sorry Chicago, but your World Series manager still prefers the NY/NJ thin-crust style of pizza!  Click below to find out his preference on a multitude of different Italian customs and products in my world famous Lightning Round!  We discussed: Italian traditions, cars, wines, foods, and il bel paese, itself!

The Cubs are gearing up to visit the White House before President Barack Obama leaves office on January 20, 2017.  The entire world knows that Obama is a fan of the Cubs’ cross-town rival Chicago White Sox, but that did not stop him from inviting the Cubs for a ceremonious visit, the last of his eight-year tenure as President of the United States. “He actually called me right after we had won… I got a call from The President from Air Force One.  We had a nice conversation.  He put it out there that: is it possible that we go there before he’s out of office”.  Maddon explained that he has spoken with Theo Epstein, the president of baseball operations for the Cubs, and that he is working on it.  Maddon’s best guess for the meeting is that it could happen sometime around Cubs Convention (January 13-15, 2017).

In fact, after receiving the invitational phone call from Obama, that, on the caller ID, appears as ‘unavailable’,  Maddon has a piece of advice for my viewer/readership:  “So if you get ‘unavailable’… answer it.”

The Future of the Cubs

Having had an “indescribable” parade with five million people taking a “Ferris Buller’s Day Off times 50” to witness it, are the Cubs and the city of Chicago poised to replicate the 2016 season?  “We’re going to get better. Honestly everybody keeps saying we’re the best….  You have to understand, we are playing with a lot of green players out there. These kids are good, but they’re really inexperienced.  The biggest difference, I think, is that we need to work to maintain our pitching and our defense because the hitting is going to get better. But we don’t [the World Series] without the way we pitched and played defense all year.”  In a Joe Namath-like statement, Maddon told me: “For me, we need to hold that line pitch at that level, play defense at that level, because I promise you these young guys are going to become better offensive players”.

To pitch at a World Series level may be tough, with arguably the best closing pitcher in Major League Baseball highly sought after by other teams in the 2017 free agent market. Maddon agreed: “Yeah, it is. Chappy was great. Aroldis was great.  However, I do believe that theres ways to figure that part of it out.  So, he’s going to get a wonderful contract.  I’m really happy, but we’ll be able to figure that part of it out.” Moving forward, Aroldis Chapman and his 100+ fastballs will no longer be the main attraction for the Cubs.

Recalling the final play of Game 7, where third-baseman Kris Bryant charged a tough ground ball and fired the throw (in time) to first-baseman Anthony Rizzo, Maddon told me: “KB to Rizz, and the smile on their faces was pretty special”.  With breaking a 108 year curse added to his resume, and with a great, young core of players returning, the Cubs are Las Vegas’ favorites to repeat as World Series Champions in 2017.  It seems to be there will be plenty of smiles to go around for many years to come.

The Yogi Berra Museum and Learning center was a fitting setting for the Italian-American World Series winner to host an intimate event. The museum’s late namesake knew a little bit about being Italian American and winning World Series championships, himself. Only time will tell if Maddon will add to his two World Series wins, but for now, Berra’s MLB record of ten is safe. 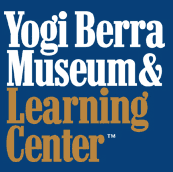 visit my iTunes official podcast or on my Soundcloud page.